Free Delivery over £50 T&Cs apply, UK Mainland only
100 day returns Find out more
Free 3 Year Warranty With an easy sign up
Pay in 3 with Klarna On orders over £70 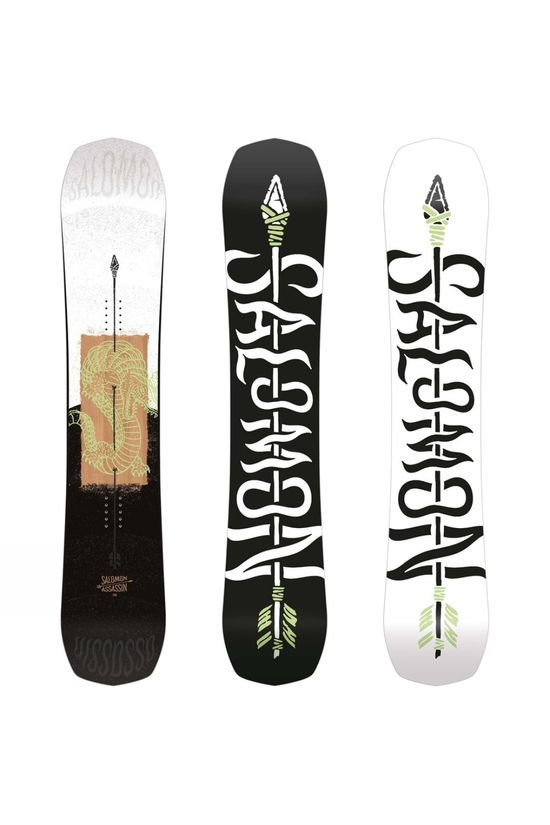 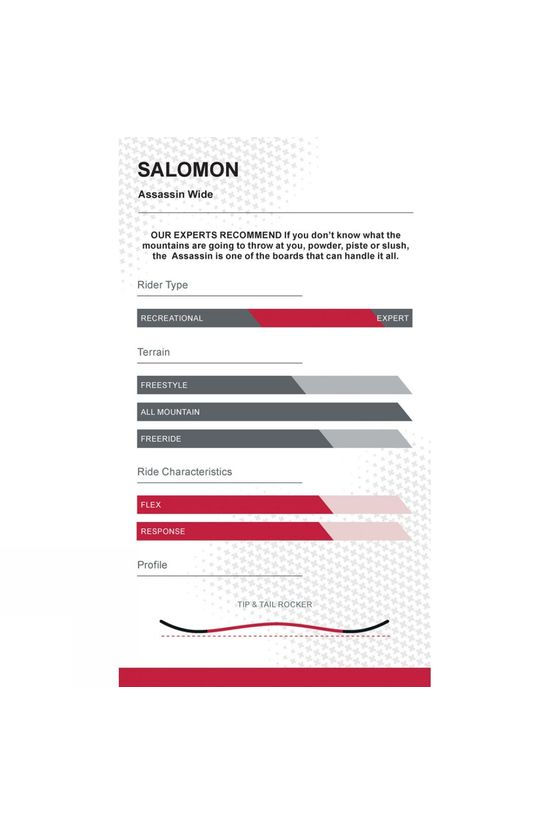 The Salomon Assassin is a staff favourite at Snow + Rock. A true quiver-killer, the Assassin is designed for the snowboarder who wants to ride fast, hard and sharp all over the mountain. The Assassin features a directional twin shape to improve float in powder without affecting the true twin feel under-foot and when riding switch. This wider version features a larger waist width to provide more clearance for the riders with larger feet, preventing heel and toe-drag on your turns.

A flagship of the Salomon Snowboards range for countless years, the Assassin features a tried and true formula that creates a stable, damp riding experience that is consistent from your first day on it to your hundredth. Bamboo sections in the core reduce the amount of resins and fibreglass traditionally required, allowing for a consistent and predictable level of pop while carbon inserts increase torsional rigidity and response so that you can hold an edge with ease.

The rocker tip and tail increase float in powder, while also slightly mellowing the contact points on the snow, meaning you won't get caught out on those nasty end-of-the-day edge catches while you're enjoying the sunset. The Quadralizer side-cut means the harder you dig your turn in, the tighter the turn radius becomes, allowing you to effortlessly swing between cruisy, casual turns and railing hard euro-carves down the piste.

Traditional ABS side-walls get the punt in this board, replaced by waterproof bamboo side-walls which provide a strong and snappy alternative using less plastics in the process. This is a supreme board that will do anything you need it to, if you're an all-mountain rider that is known to occasionally make a stop in the park for a lap or two; this is the board for you.

Few names are as inextricably linked to the Alps as Salomon, founded in 1947 in Annecy, the heart of the Alps. It started life in François Salomon’s small workshop with the help of his wife and son.  Salomon have been reinventing gear, clothing and themselves for decades. This season look out for their Ice Star 3-layer jacket. It’s an all-mountain shell that’s extremely versatile whether you’re cruising groomers or chasing powder lines in waist deep snow.